The first information-evening about the southern Überseequartier in the HafenCity concerned one million tons of earth and 150 years of history. Jacques Boursault, Head of Construction Überseequartier, Viktor Eskioglou, Construction Manager Überseequartier, and Dirk Hünerbein, Head of Development Germany, explained the project and the current status of the construction site on behalf of Unibail-Rodamco-Westfield. Christof Heckendorf from the engineering company SWECO GmbH described the situation that currently exists on the 67,000 m2 site between Magdeburger Hafen and Chicagostraße as well as Elbe and Überseeallee.

A property enclosed by water on two sides, on which a gas works used to stand and which is divided by a subway, is a great challenge even for tough and experienced construction experts. Especially exciting is the history of the site which was the location of Hamburg’s largest gasworks Grasbrook from 1845 to 1979. From here, amongst other things, the street lamps were supplied with town-gas, which had previously been extracted from the coking of hard coal. Some of the by-products of this process penetrated the soil and now reappear on the surface together with a smell that some residents perceive as unpleasant. Christof Heckendorf explained that the threshold of perception of odour (https://www.bremer-umweltinstitut.de/forschungsprojekte/forschungsprojekt-geruchsschwelle-naphthalin.html) was well below the limited workplace limiting value. At two stations voluntary measurements are carried out on a regular basis according to a concept developed by the Hamburg Environmental and Health Authority for the first gasworks redevelopment in 2004/2005. 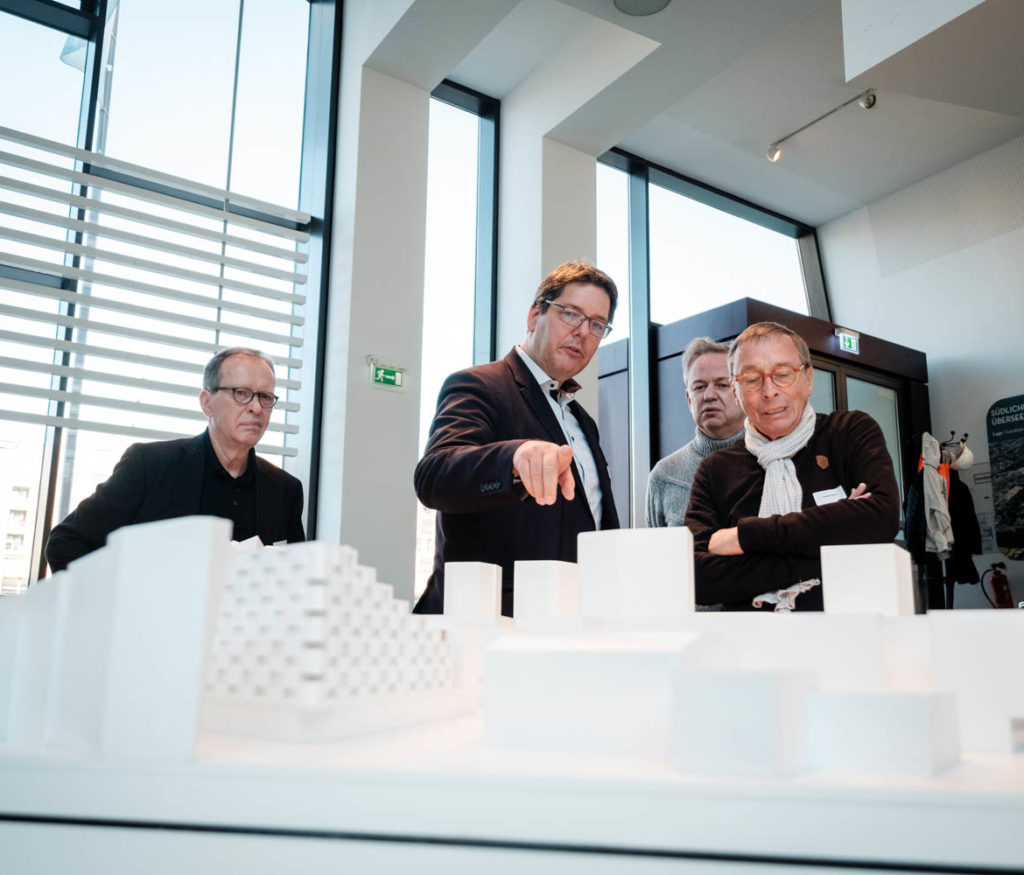 Unibail-Rodamco-Westfield wants to keep the burdens for the residents as low as possible and, therefore, provides for covering the affected areas with foils and sand on weekends and all truck loads to be covered with tarpaulin: “No truck leaving our construction site is not covered”, confirms Viktor Eskioglou.

While on one side the excavation pit will continue to be excavated until the end of the year (of the one million tons of excavated material, around 900,000 tons have already been removed), the building construction on the other side is already underway – the first crane  was erected on the 8th of February, 2019, and the first (a milestone on every construction site) flowed on March 13th, 2019.

In future Unibail-Rodamco-Westfiled will invite visitors to information-evenings at regular intervals, of which the next one is scheduled for autumn 2019. If you are interested in future information, please use the contact form.

Excavation on the finishing straight

Turnaround with two wheels
Westfield Hamburg-Überseequartier: “Pioneering” – Unibail-Rodamco-Westfield presents plans for the first reusable system in an urban quarter in Germany to Environment Senator Jens Kerstan
Login to Südliches Überseequartier
Reset Password
Enter the username or e-mail you used in your profile. A password reset link will be sent to you by email.

SEND US A MESSAGE