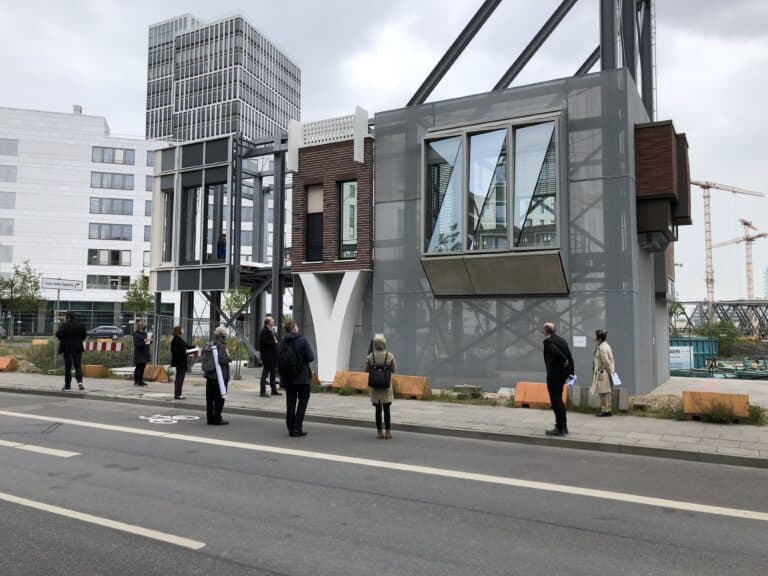 Successful Inspection of the Facade Models of Westfield Hamburg-Überseequartier

Being 60 metres long and 15 metres high it is as big as an apartment-building – the facade model of Westfield Hamburg-Überseequartier. The so-called mockup displays the materials and design of 10 of the buildings that are being built in the southern section of Überseequartier. On 18th of May 2020 representatives of the city, the architects and project managers of Unibail-Rodamco-Westfield, have inspected and approved the sampled facades – with headsets for communication, face masks, and with sufficient distance from each other.

The ten different facade patterns of the mockup already give a hint of the diversity which future residents, visitors, and employees of Westfield Hamburg-Überseequartier can expect. None of the models resemble each other. Typical Hanseatic bricks are hanging next to modern glass elements in a steel construction of the Arbeitsgemeinschaft Baugrube USQ TF3-6 Hafencity Hamburg / Implenia Spezialtiefbau GmbH. The substructure of the mockup was made by HAGA Metallbau GmbH. This facade mockup – unique in its scope – allows a precise examination of these aspects under realistic conditions. What colour will be given to the grouting of the clinker brick facade? Which glass will fulfil the requirements of both the optical demands and the construction physics?

Chief Planning Director Franz-Josef Höing is satisfied with the results presented to him by architects of three offices which give Westfield Hamburg-Überseequartier a vibrant harmonious face of materials, colours and designs.

Susanne Welcker and her team of Hild and K Architects have invented a system with which undreamed-of textile forms have previously been realized with bricks, for example a pleated finish on the facades of the buildings F1 (hotel and retail) and F5 (cinema, retail, and gastronomy).
For Detlev Kozian of Böge Lindner’s office in Hamburg HafenCity is a home game. The office in Speicherstadt has already designed and realized several buildings in HafenCity. For him “Westfield Hamburg-Überseequartier is the long-expected centre of HafenCity which will establish a relationship with the city centre”. Böge Lindner’s team has also used clinker bricks for the facades of the buildings F2 (cinema and retail) and F4 (hotel and retail).

Just like Prof. Arno Lederer of Lederer Ragnarsdóttir Oei in Stuttgart; for him bricks are anyhow the favourite material because of being practical and robust. He is enthusiastic about the quality of the facades: “When planning investor-projects it is not always usual to actually talk about the joint between bricks.” His inspiration for the design of the office building “The Yard” was the Doge’s Palace in Venice.
The citizens of Hamburg will have to be patient a little longer till Westfield Hamburg-Überseequartier opens up. But those who already want to have a look into the future of the quarter today can marvel at the 1:1 models of the facades in Shanghaiallee (corner of Überseeallee).

Aware of our responsibility – Working in times of Corona

Convenience meets new possibilities of mobility – An outlook for the Westfield Hamburg-Überseequartier: A guest article by Jannick Fischer, Marketing Manager at Floatility