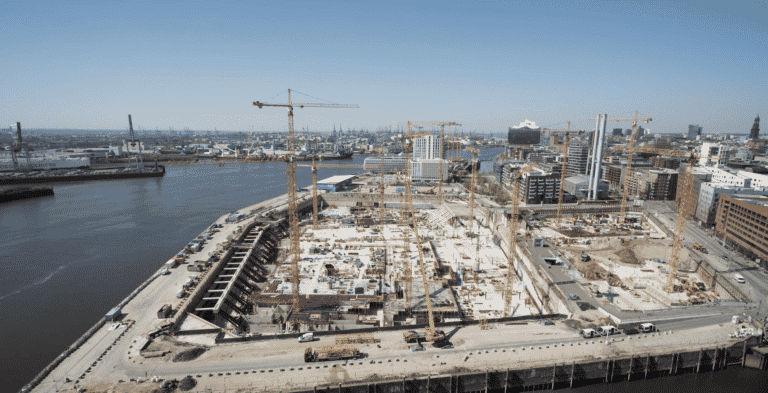 Time is passing quickly: An unusual year of (construction) progress

Even if the year 2020 developed quite differently than we all expected, there was also progress according to plan in it. Like on the construction site of Westfield Hamburg-Überseequartier. The film, which is about a minute long, shows in fast motion what has grown on the huge site in 365 days. The images of the development of the new district in the heart of HafenCity are as atmospheric as they are impressive – we also review the most important milestones that go beyond the building project. It was not only bustling activity under stricter hygiene regulations, but also new partnerships that characterized an unusual year of construction progress at Westfield Hamburg-Überseequartier.

The year started with the opening of the new showroom in close proximity to the construction site. At Sumatrakontor, Unibail-Rodamco-Westfield (URW) is giving an outlook on what is to come (by 2023). The 140-square-meter exhibition space provides both visitors and guests with a large-scale, interactive insight and overview using a 3D model and a virtual reality lounge. The area also offers space for exchanges with business partners, stakeholders and potential tenants. A clear signal to the city of Hamburg, the neighbors and potential business partners, whom URW would like to approach in an open and informative manner. *

In February, URW announced that lifestyle group Accor and real estate developer B&L Group will bring three hotel brands to Westfield Hamburg-Überseequartier. Pullman, Novotel and ibis Styles will create a total of 830 rooms that can serve different target groups at the location. The project is currently one of the largest of the European market leader Accor and underlines the claim to establish Westfield Hamburg-Überseequartier as a “mixed-use destination with supraregional appeal,” says Andreas Hohlmann, Managing Director of Unibail-Rodamco-Westfield Germany.

Another milestone followed in the autumn: In the area of office leasing, the partnership with CBRE and Grossmann & Berger was announced. “The district offers a dynamic combination of living, working and living, which ensures the attractiveness of the workplace and environment,” explains Julian Zadeh, Head of Office Leasing Hamburg at CBRE. This is becoming increasingly important in the “War for Talent” and is also competing with working from home, he adds. The 48,000 square meters of office space will provide room for around 4,000 modern workplaces – divided among four building complexes and individually designable. Extensive views of Elbe river and the city center are included.

All this has happened as the neighborhood has grown further and further out of the ground. As the year is coming to an end, 20 cranes are in place to literally take the project to the next level. Jacques Boursault is Head of Construction. He reports on the progress, “We are making good progress on the construction and are on current schedule. In the last few months, we completed a number of steps on the construction site, which is about ten soccer fields in size: all bored piles, lift piers and anchors have been installed and some anchors have been heaved into the ground to a depth of up to 30 meters. The excavation pit has been completely dug. We are currently finalizing the work on the base slab and the building construction is in full swing. In the larger, southern construction area the 3rd and 2nd basement floors are being built, and in the northern construction area the 2nd and 1st basement floors and the first floor are being built. In the northern part we have already reached the ground level in part. We are continuing to go ahead at full speed!”

In 2021, the sky will be the limit. And those involved are neither thrown off course nor discouraged by the Corona pandemic: “The anticipation of this vibrant future location is now growing all the more intense,” says Dirk Hünerbein, Director of Development Germany at URW.

*A comprehensive protection and hygiene concept was developed for the showroom. Throughout the year, the premises were operated in compliance with the respective current Infection Protection Ordinance of the city of Hamburg.

SEND US A MESSAGE