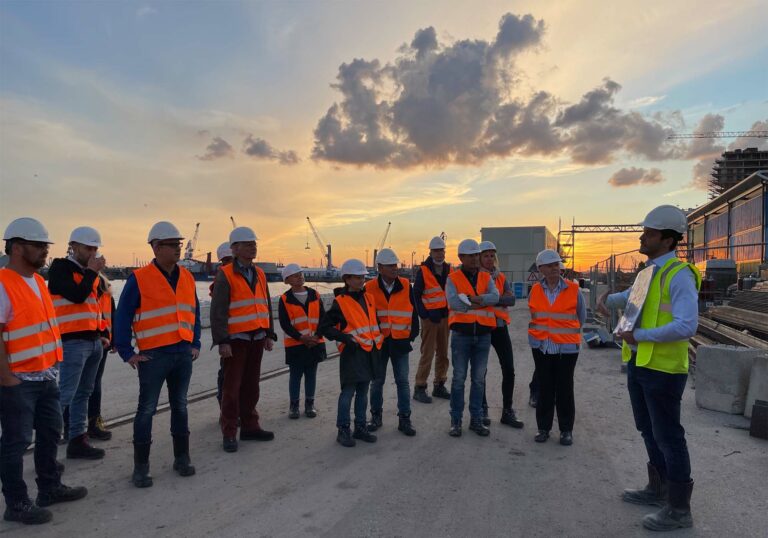 On Tuesday evening, September 28, 20 HafenCity residents swapped their living rooms for helmets and safety shoes. The reason: for the first time, a neighbourhood event organized by Unibail-Rodamco-Westfield (URW) took place on the construction site of one of Europe’s largest building project. And this time, too, the available seats at this very special information and dialog event were quickly reserved and confirmed. Due to the corona pandemic, residents had met at the screen for the last three neighbourhood nights.

Thanks to the relaxed legal regulations and the extensive security measures on the part of the host URW, the eighth information and dialog event for the neighbors of the new quarter since the laying of the groundbreaking in May 2019 could finally take place directly on site again. For the URW managers present, Director of Development Dirk Hünerbein, Senior Construction Manager Viktor Eskioglou and Marketing Manager Karen Mester-Lichtsinn, this provided the opportunity to give the participants not only a nice reception in the showroom, but also an exclusive tour of the construction site. After all, a new milestone had been reached on this site just a few weeks ago: The 65,000 square meter base plate was completed. For the concreting of the last section of more than 700 square meters – which roughly corresponds to the size of the penalty area of a soccer field – the construction teams had to often start at around 6 am and needed the whole day to professionally process 1,700 cubic meters of concrete.

Much more has happened since the last neighborhood evening in April. URW was able to announce the first long-term leases with the four major strategic partners LEGOLAND® Discovery Centre, Kinopolis, REWE and BUDNI. Since the end of July, by far the largest anchor tenant in the heart of Hamburg’s HafenCity has also been confirmed: Stuttgart-based fashion and lifestyle company Breuninger will open a 14,000-square-meter flagship store in Westfield Hamburg-Überseequartier in 2023, making it its first property in northern Germany. In addition, the German Sustainable Building Council (DGNB) awarded Westfield Hamburg-Überseequartier the DGNB pre-certificate for sustainable building sites as the first major project during the Construction Industry Day on June 10, 2021.

The evening before, members of the Executive Board of Netzwerk HafenCity had already been taken on a tour of the construction site to find out what was being built at its member URW. Unibail-Rodamco-Westfield is active in the “Interessengemeinschaft Gewerbe” (IGG), a community of interest, with the aim of making HafenCity even more livable and lively.

Dirk Hünerbein was very satisfied: “After the long period of lockdowns and exclusively digital events, it was a great feeling for all of us to finally be able to face each other directly again and exchange ideas. You could feel how we are slowly growing together as a community and how Westfield Hamburg-Überseequartier is becoming a central part of HafenCity. Events like our neighbourhood night and our showroom finally reopening are great opportunities to stay in dialogue with our neighbours.” The next neighborhood event is expected to take place at the end of the year.

Result of Community Day 2021: Ten big buckets of trash and a lot of fun

The Westfield Hamburg-Überseequartier on tour