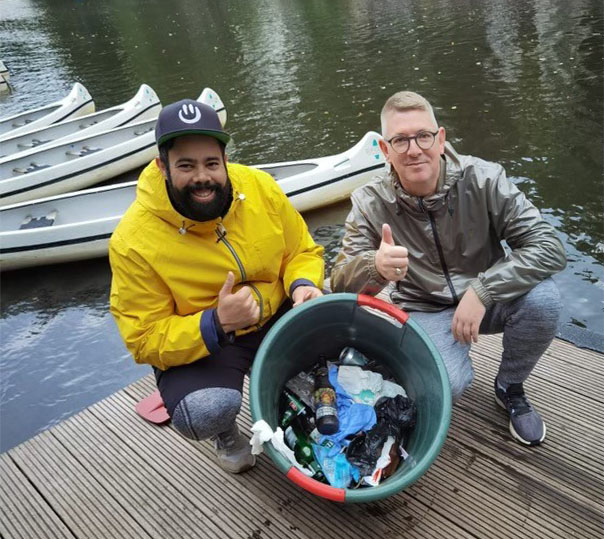 Result of Community Day 2021: Ten big buckets of trash and a lot of fun

The Alster, Hamburg’s blue center and important recreational area in the middle of the city, attracts thousands of water sports enthusiasts, joggers and walkers, especially on nice days. Particularly the west bank is characterized by a lot of nature and a large park. But also the many small canals are lined by gardens or green overgrown banks and offer habitat for many animals – from the majestic swan to the more exotic turtle. Unfortunately, such a large body of water in the middle of the city also collects a lot of trash, which is not only not a pretty sight, but also a danger to the many animals. Therefore, on September 23, 28 colleagues from Unibail-Rodamco-Westfield (URW) went on an Alster Clean Up Tour with kayaks and canoes and fished ten trash cans with garbage from the Alster and the adjacent banks. The action took place as part of the annual URW Community Day, which has become a popular and permanent institution across all locations, as it combines the beautiful with the useful.

After all, the day is not only an often very entertaining team event but is always combined with social engagement in the local community. In 2019, for example, the Hamburg colleagues helped with renovation work at the children’s farm Kinderbauernhof Kirchdorf e.V. This year, it’s the Alster Clean Up.

“Waste in nature is our shared responsibility”

On September 23, together with the environmental NGO GreenKayak, which together with volunteers has collected more than 56,000 kilograms of trash from European waters over the past four years, and the SUP Club Hamburg, the 28 URW colleagues headed out on the Alster with kayaks and canoes for a cleaner environment. In two groups, plastic bags, beverage cans, coffee cups and even a street sign were fished out of the water or collected on the banks for two hours each. “Waste in nature is our shared responsibility,” warns Tobias Weber-Andersen, the Danish founder of GreenKayak, not only condemning the carelessness of some people but also appealing to our sense of responsibility as a society.

“The topic of sustainability in its various facets plays a very important role for our Westfield Hamburg-Überseequartier project,” explains Dirk Hünerbein, Director of Development Austria & Germany at Unibail-Rodamco-Westfield. “We are the first major project to be awarded the new DGNB certification for sustainable building sites (internal link), and overall, we focus not only on environmentally friendly construction, but also on contemporary ecological use after completion. But in the same way, we promote culture and education and support local communities – in other words, as a company we assume a broad environmental and social responsibility. That’s why it’s great to see how our colleagues in Hamburg have once again shown their commitment to making our home a better place.”

Together for a healthier environment

The “Community Day” is derived from the Group-wide sustainability strategy “Better Places 2030”. On this day, URW employees across Europe get involved in social and charitable projects. As a rule, they support organizations in the areas of climate and environmental protection, social integration, childcare or education.