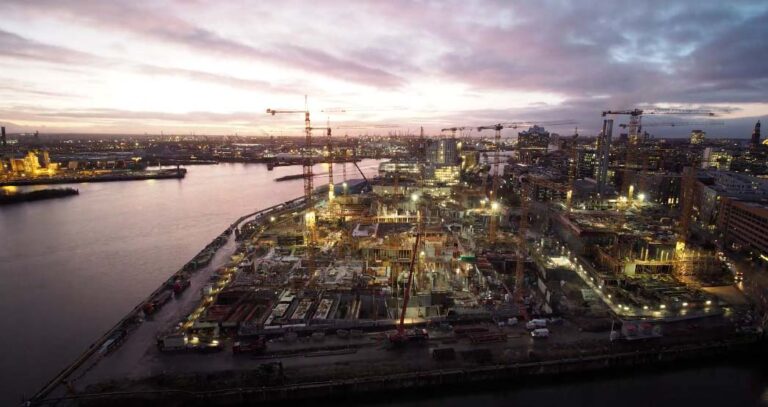 On and off the construction site: Westfield Hamburg-Überseequartier takes shape

Until 2020, the construction site of the Westfield Hamburg-Überseequartier grew more in depth than in height: Bored piles, jacking piers and anchors up to 30 meters underground were set and the floor slab was poured – as a foundation for the basement floors 3, 2 and 1. But in the past months of 2021, which is now coming to an end, did the buildings visibly rise up to the sky – in part, incl. the basement floors, seven floors and more than 100,000 square meters of floor slab and raft area have already been erected. At times, 800 people per day poured 59,000 cubic meters of concrete, laid 11,000 tons of steel reinforcement and installed 3,800 tons of composite beams and columns from steel. But a lot has also happened away from the construction site in the past twelve months – from the announcement of the first tenants and DGNB’s pre-certification as one of Germany’s first sustainable construction sites to support for homeless people during the cold season (cooperation with Sheltersuit Foundation).

Groundbreaking partnerships in the entertainment and (convenience) retail sectors
At the end of May 2021, Unibail-Rodamco-Westfield (URW) Germany, project developer of Westfield Hamburg-Überseequartier, announced the first long-term leases with four major strategic partners from the entertainment and convenience retail sectors: The international children’s and family attraction LEGOLAND® Discovery Centre will open its first location in Hamburg at Westfield Hamburg-Überseequartier on more than 3,400 square meters. For Kinopolis, one of Germany’s best-known and most successful cinema operators, the ten-screen premium multiplex with a total of over 2,300 seats will also be the first branch in Hamburg – and at the same time the city’s largest cinema. In addition, two genuine traditional retail brands are moving in with flagship stores individually adapted to Westfield Hamburg-Überseequartier: Germany’s second-largest food retailer REWE is moving into a store on a sales area of around 3,000 square meters, while the regional drugstore chain BUDNI is moving into a store on around 800 square meters. Just two months later, Stuttgart-based fashion and lifestyle company Breuninger also signed its anchor tenant agreement and will open its first store in northern Germany in 2023 in the heart of HafenCity on more than 14,000 square meters of total space. “Unibail-Rodamco-Westfield is firmly convinced of the future of city centers, districts and quarters in which major social trends such as extraordinary entertainment or eventful gastronomy, but also attractive and innovative retail in particular, play a major role,” explained Andreas Hohlmann, Managing Director Austria & Germany at URW.

Awarded as sustainable construction site
URW is pursuing an ambitious sustainability strategy with “Better Places 2030,” with which the company aims to meet the greatest challenges facing the commercial real estate industry and create “Better Places” every day. One result of this effort is the awarding of Westfield Hamburg-Überseequartier by the German Sustainable Building Council (DGNB) as the first major project with the DGNB pre-certificate for sustainable construction sites. The mixed-use quarter is one of the first four projects ever in the whole of Germany to successfully use the new construction site certificate as a planning and management tool, thereby committing to the highest possible sustainability quality even before completion. For example, a special low-carbon concrete is used in construction, the wood comes from legally verifiable sources, and recycled steel is used for concrete reinforcement. In addition, URW pays special attention to the procurement of recyclable materials, their efficient use, and the avoidance of waste. “Westfield Hamburg-Überseequartier thus takes on a real pioneering role – a project from which others can learn,” said Johannes Kreißig, Executive Director of the DGNB, during the award ceremony.

Protect lives and help acutely
When temperatures drop below freezing in the winter months, people without a permanent home on the street are at risk of severe frostbite and, in the worst case, death from cold – this also applies to Hamburg. URW therefore launched an initiative in November 2021 together with the Sheltersuit Foundation and local aid organizations in Hamburg and 14 other German cities to provide short-term support for homeless people: Across Germany, 100 sustainably produced, wind- and waterproof protective suits – so-called Sheltersuits – were distributed to homeless people in need, 20 of them in Hamburg alone. The cooperation, which is still ongoing, is accompanied by a comprehensive information offering to educate and raise awareness around the topic at the participating locations and via the respective social media channels. “It’s great to see that companies are taking on social responsibility,” says a delighted Paul Zurink, campaign manager at Sheltersuit.

One can be curious about the year 2022. Despite the ongoing Corona pandemic, Dirk Hünerbein, Director of Development Austria & Germany at URW, is optimistic: “We have shown, especially in the past two years, that as a strong team and together with our partners we can face any challenges and find solutions. We look forward to seeing Hamburg’s new pulsating destination grow a bit more every week.”

The tallest Advent candles in Hamburg!

Instead of paper cups and plastic bowls: Joint workshop with the initiatives Zero Waste e.V. and Plastikfreie Stadt on innovative reusable systems for catering out-of-store sales